Welp, with temps hitting the 90s in zone 6a, the peas are officially past their prime. We had a better run with them this spring than we did last year. I’m still not entirely happy with our pea harvest, but if last year’s haul was akin to the scene in Mickey’s Christmas Carol where Mickey is slicing the pea for Christmas dinner, then at least this year everybody got their own pea.

But the time had come to clear out the peas from Pottersville. How did I know? Well, aside from the afore-mentioned temperature spike (most pea varieties won’t set new flowers when temps get above 80 degrees Farenheit. Since pea pods come from the flowers, no flowers = no peas), they were showing some wear after their three-month season like …

some brown crispy leaves starting at the bottom of the plant:

And evidence that something had been chomping on them:

So, time to put them to bed. Pea vines are excellent additives to compost because of the nitrogen, but knowing that peas and corn are good buds, I decided to lay the discarded pea vines directly around our corn plants so they would decompose and add to the soil for the corn: 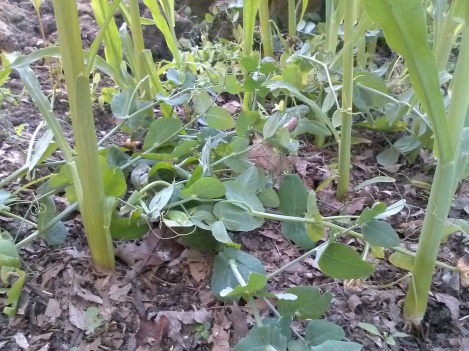 But because I’m a big fan of interplanting – or planting two or more kinds of plants together – when I pulled out the pea vines from the Pottersville pots, it was like getting a brand new garden because I had interplanted parsley, carrots and argula with the peas at the start of the season.

The argula, also a cool weather crop that doesn’t dig hot temperatures, had started to bolt in the heat. Bolting means that a plant that we usually harvest for its leaves or roots – like lettuce, cilantro, radishes, etc. – matures, starts to form flowers from which it will create new seeds and typically gets tough or bitter or too spicy. So, the part we normally eat doesn’t taste very good, but when a plant bolts, you can usually collect the seeds. I’ll capture the argula seeds and save them for another sowing in the fall (probably with some version of the Pansyhose).

The carrots are runty since they’ve been growing in the peas’ shade, but I expect they’ll smarten up here shortly. 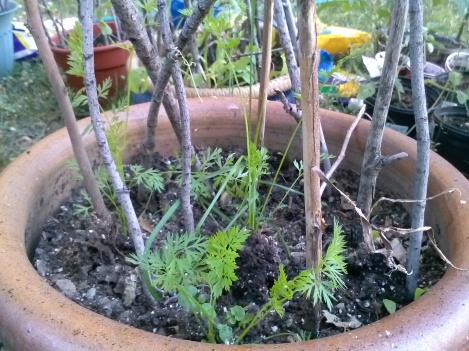 But the parsley is doing fine and I harvested some for dinner over the weekend:

I’m out of town this week but when I return, I’ll add some good organic fertilizer to the Pottersville pots, then plant some Roma tomatoes plants I have because parsley and carrots (and even lettuce) are all good companion plants for tomatoes.

So, adios peas. Via con dios and we’ll see you again around September.

One thought on “Peas Out”